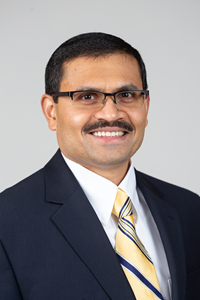 The Presidential Award recognizes the symbiotic mentor-mentee relationship which empowers the mentee to reach their highest potential. This award is a tribute to my students, fellow colleagues, and university for their continuous support to achieve this significant milestone. As educators, we play an important role in influencing students’ lives by being inspiring role models. I am humbled by this honor and am cognizant of the fact that it brings along a genuine commitment to STEM education and outreach excellence.

Throughout his academic career, Salil Desai has developed research, educational and outreach programs to enhance the recruitment and retention of African American students in the fields of nano-, micro-, and bio-manufacturing. Dr. Desai believes that mentorship and education is the mission of "igniting the spirit of inquiry to transcend knowledge that benefits humankind." As an engineering educator, he envisions a holistic education plan, using a variety of pedagogical and longitudinal assessment strategies, that prepares minority students beyond the classroom.

From 2010 to 2016, the Industrial and Systems Engineering Department’s undergraduate enrollment increased by 55 percent. Dr. Desai has been instrumental in securing more than $6 million in infrastructure and education/research funding from different agencies to advance the educational experiences of minority students. He has played a key role for setting up advanced manufacturing programs at his institution and has directly advised more than 13 Ph.D., 14 M.S. and 15 B.S. students towards careers in academia, industry and national laboratories. In addition, he has been a mentor to several minority students in different capacities, such as capstone advisor for 45 minority students.

Dr. Desai is an integral driver of several minority research, educational and outreach programs at his institution, including the North Carolina Louis Stokes Alliances for Minority Participation, Intel, the Semiconductor Research Corporation, and NASA’s Science, Engineering, Mathematics, and Aerospace Academy. These programs have resulted in significant increases in the participation and retention of historically underrepresented populations spanning K-12 to undergraduate students in the STEM fields. His instructional modules have been availed by the NSF National Resource Center for Material Technology Education for program enhancements at minority institutions nationwide.