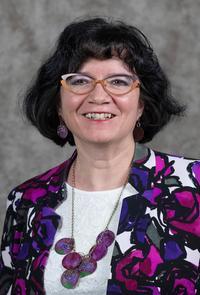 It is a major honor—and a humbling one—to receive this Presidential Award because it confirms what I have emphasized for years—how one person can make a difference to improve lives. As a girl from New Mexico, growing up I never dreamed I would be under consideration for such an award. This Presidential Award also verifies that my efforts over decades to increase access and inclusion in the economics profession, in STEM, and in higher education matter at the national level.

Marie Mora is Associate Provost for Academic Affairs and Professor of Economics at the University of Missouri–St. Louis (UMSL). With nearly 25 years as a faculty member, starting at New Mexico State University in 1995, then the University of Texas-Pan American (UTPA)/University of Texas Rio Grande Valley (UTRGV) 2002–2019, and now UMSL, Marie has impacted the lives of many scientists through a variety of mentoring initiatives for early-career (and mid-career) STEM faculty and students. Since 2013, Marie has been Director of the American Economic Association National Science Foundation (NSF)-funded Mentoring Program for underrepresented racial/ethnic minority Ph.D. economics students and new Ph.D.s. Approximately 50 Black and Hispanic students graduated with their Ph.D.s under her directorship. She has been a mentor in this program since 2006. Marie was a mentor in the NSF-funded Diversity Initiative for Tenure in Economics, 2008–2010. She is a founding member and former President of the American Society of Hispanic Economists (ASHE, now in its 19th year). She also mentored many early- and mid-career women faculty in various STEM fields as a member of the UTPA/UTRGV NSF ADVANCE Leadership Team, 2012–2019. Marie earned her B.A. and M.A. degrees in economics at the University of New Mexico (UNM), and Ph.D. in economics at Texas A&M University. Her honors include the Outstanding Service Award, ASHE; Impactful Mentor Award, AEA Mentoring Program; Inspiring Leaders in STEM, INSIGHT into Diversity; Outstanding Support for Hispanic Issues in Higher Education Award, American Association of Hispanics in Higher Education; Cesar Estrada Chavez Award, American Association for Access, Equity, & Diversity; and Distinguished Alumna, UNM Department of Economics.